Skip to content
Previous Next
Kieran Scott: From School to Cycling

Kieran Scott is probably the longest standing member of the Veris Racing team having joined as a junior many years ago under the Otoc Vault Racing banner. This year Kieran has graduated from school to the full time world of cycling and hopes to now hone his focus to cycling exclusively for the next couple years prior to deciding on his future academic/employment direction. We asked kieran to pen his thoughts regarding his Australian National Title appearance this year in Victoria….

Nationals is not your local club race; it is a race against the best in Australia and for the first time the Junior U19 Male and Female athletes raced upon the Mt Buninyong and Ballarat circuits alongside the U23 and elite category. The key to Nationals is getting the preparation right. 2017 was arguably not my best year as I broke my collarbone in the early part of, struggled to regain fitness/form and then fell sick during the Autumn and winter months along with heavy school commitments I was unable to compete at Oceania’s, Mersey Valley Tour and Nationals during 2017.

I feel that I was at a considerable disadvantage not being able to compete at these critical events as this meant I didn’t have any times or form level that I could compare and benchmark myself to other riders as I had not competed at a National Road Championships since September 2016. After not being able to attend these events I set myself the target of finishing year 12 successfully and balancing the school workload while keeping a reasonable training and local racing base going. After finishing school in October, I began my training for nationals. The focus was to build the base kilometres before adding in the intensity and specifics targeted at the TT and road race demands. It was around November when I kicked my training into top gear. Not having school meant I had a lot more time to focus on training. This helped when I had higher fatigue and stress as I was able to recover far better.

In the final few weeks of training I pushed myself to get through the training load. This included competing in ATTA time trials, Tour of Margaret River and of course working on sessions of 9 hill repeats up Welshpool Road and other inclines resembling Mt Buninyong and expected race intensity. I made rapid gains in overall form across many aspects.  I also focussed on making sure I was doing the little things that help, such as stretching, hydrating and eating properly. I find these maximize performance outcomes on the day of racing.

While at nationals I did not race the criterium as I did not see this to be the primary focus and I didn’t want to put myself at risk of crashing or not being able to recover before the next day of TT racing. As it turned out, the criterium was a very controlled race, and I would have found it easy to sit in and not expend myself, though I think I made the best decision with the knowledge that I had.

The 20km time trial was next upon a demanding out and back course that was very lumpy with some 300m of climbing. I had the goal of finishing top 5; I didn’t have much to base myself off as looking back on the WA State Championships a few riders moved up an age category. I finished 14th out of 42 starters which I should be happy with considering my interesting 2017 coming out of a low level.  I now have something to work off moving into 2018.

I feel this was the same with the road race where I finished 20thout of 82 starters with 53 DNF’s. Due to the extreme weather conditions, fire hazard and safety of competitors and bystanders, the race had been shortened from 104km 9 laps of the Mt Buninyong circuit down to 70km 6 laps and only some 1100m of climbing, therefore somewhat shorter and more aggressive racing played out than I had been training for with our lap times in most part equal to those of the U23 & Elite male category’s.

Overall I am happy with my experience with nationals and look forward to what 2018 holds and working towards achieving my set goals.

A special thanks to Brad Hall for all the training preparations, guidance and race days assistance he provided along with the ongoing support from Veris and the Cycling Development Foundation. 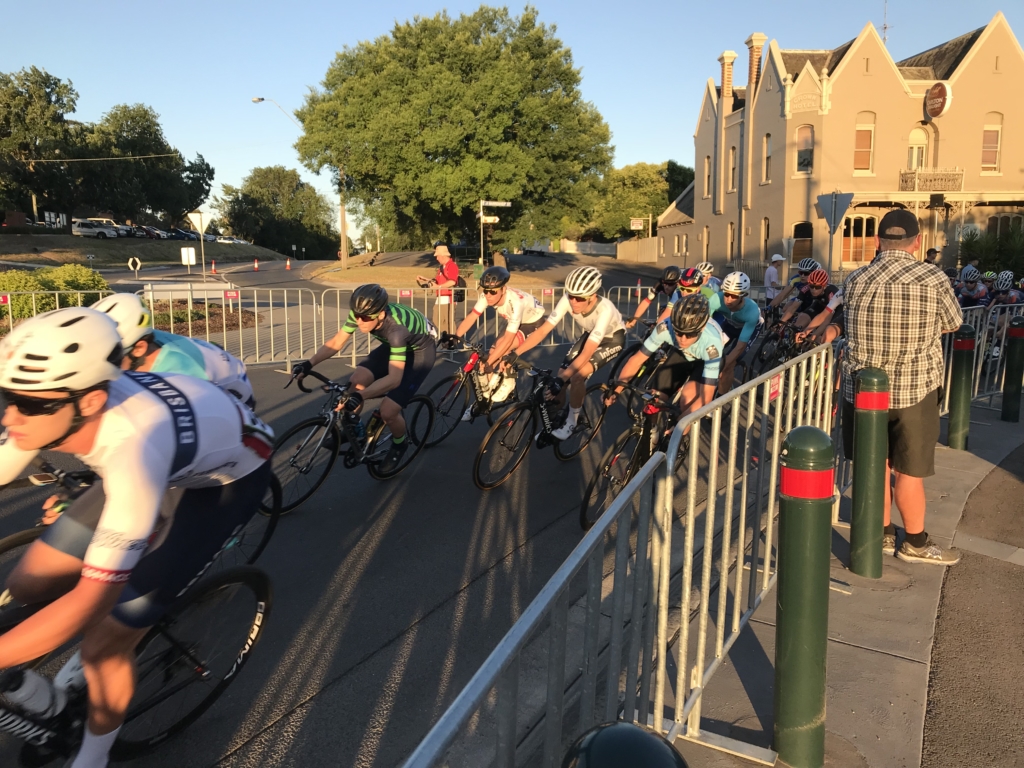 Kieran: middle centre of field, at this years U19 National Championships