Skip to content
Previous Next
Leighton Earns Podium in Belgium

With the reduction in National Road Series (NRS) racing events over the calendar year, several of the Veris Racing men’s riders ventured off the Belgium to build form and fitness for the remainder of the NRS season commencing in August.

Leighton is very new to cycling racing, having come from an elite triathlon background he shows immense dedication to training and progressing in the sport. Leighton also boasts a huge Vo2 max and a professional application to quality work meaning he is only ever destined for a future in the sport. Leighton accesses the Veris Racing pathway through his hard work and dedication, not only to racing but also through our various community engagement initiatives such as ride to work days, charity rides and other events hosted on behalf of our partners to best engage community through cycling and exercise. We hear about Leighton’s racing experience below…

“Over the past few weeks I have had the amazing opportunity to race and train in Belgium. This trip made me nervous but excited. Talking to many Perth cyclists about what to expect the general conclusion was “it’s going to be a whole different ball game”. The past few weeks have been invaluable. From nervously lining up for my first race in Izegem and getting dropped at 80km to placing 2nd in my most recent race at Roeselare Beitem to say that I have learnt a lot would be an understatement. I feel, personally, that the racing style suits me. It favors the optimistic rider.

I love riding my bike hard sometimes to the point I forget there is a race to contest. This came to a head in my most recent result. I got into the early break with around 15 other riders, the weather took a turn for the worst which started to hurt some of the guys. I looked to use it to my advantage. With three kilometers to go the break caught a solo escapee and I hit it as hard as I could. I knew with the wet conditions I could risk it on the technical final 3km. One other rider followed me and we worked together until the finish, unfortunately he came around me in the final 10 metres to take the win. Belgium racing has been a great learning experience.

Racing up to four times a week with bunches of 160 skilled riders its hard not to pick a thing or two. I would have to say being dynamic and not panicking in the peloton has been the greatest skill I have learnt. For example, Taking corners and having to jump road furniture or jumping up onto the footpath to move up the bunch before a critical technical section. No one seems to get too angry here on the bike. The peloton is like a moving, living organism at first it is a shock but you quickly learn to move with it and just go with the flow. I would like to thank first and foremost my parents for helping me get across to Belgium, my teammates in the house and Veris Racing for their continued support for the upcoming NRS races.” 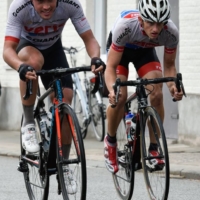 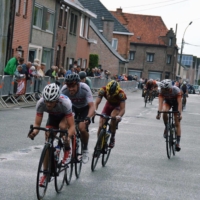 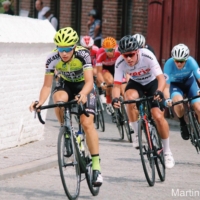 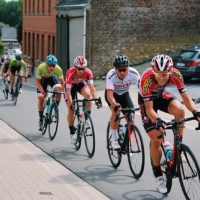 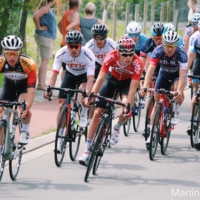 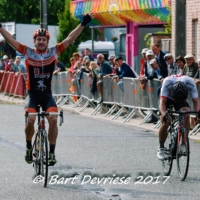 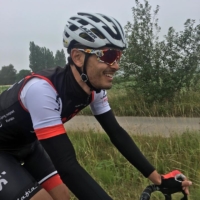 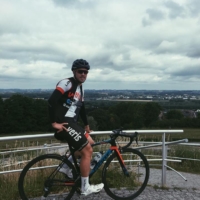