Skip to content
Previous Next
Ride Against Domestic Violence

In May this year, Veris Racing athlete Sabine Bird participated in the Ride Against Domestic Violence, a 260km ride from Busselton to Parliament House, Perth.

The ride aims to raise awareness and funds for those affected by domestic violence.  Domestic violence is often a silent occurrence in our society and therefore immensely downplayed and frequently ignored. Rates of domestic violence have steeply increased in Australia over the last five years alone, showing that misogyny, sexism, and power-exploits to cause fear by aggression, suppression, bullying, and sexual abuse are far more prevalent than the majority of our community are aware.

Currently, domestic violence by a partner is the leading cause of illness, disability and deaths for women aged 25 to 44 Australia wide.  Sadly, in Western Australia we experience one of the highest incidence rates of domestic violence in the country with refuge shelters consistently running at full capacity, with many victims struggling to get the urgent support needed to survive, and get their lives under control.

The ride brought together those from opposite political parties, real-life rivals in business leaders and union representatives, as well as first time cyclists and true athletes riding side by side for the same cause, looking out for each other whilst battling the elements.  Participants rode the distance as one solid unit, mixing, mingling, supporting and networking – all for that one reason – to speak out about the shocking prevalence of domestic violence in society.

How does society tackle this ever-increasing problem with the current means provided by health care workers, business and volunteers?  The issue needs to be talked about across all areas of society.  The current incidence report rate of only 20% is due to the victims’ fears and lack of knowledge about the support networks in place.  By speaking out, and educating all, the community can start fighting against misogynistic language and sexism being used so carelessly in society.

The Ride Against Domestic Violence aims to encourage victims and bystanders to speak up and educate others. It is also a call for help to acknowledge the shocking statistics and help raise funds for more refuges, staff, and equipment to help current victims find a place to be safe where they can recover.

After participating in the ride, Sabine has an immense respect for the victims who speak out regarding their mentally crippling experiences and who fought their way back to a “normal”, healthy life after enduring a broad range of abuses.  Respect is also extended to the healthcare workers, refuge employees and associates, and the police force, who ultimately have to deal with these dark experiences.

Pain, crisis, doubt, fear, and demoralising experiences are counteracted by courage, endurance, resilience and a will to fight!

Sabine is currently preparing to ride in the most challenging cycling race in the world, being the Race Across America.  After participating in the RADV, the world for Sabine has suddenly become a much smaller place.  No matter how harsh and painful the Race Across America may be, she now knows there are others in the world who have endured much darker places before and have fought their way out.

Thank you, Sabine for your support of the Ride Against Domestic Violence and sharing your experience.

If you would like to donate to the Ride Against Domestic Violence, please visit http://rideagainstdomesticviolence.com/ 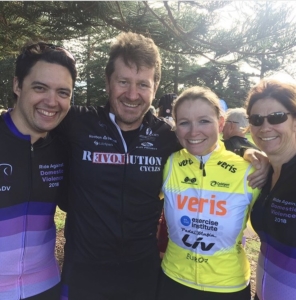