The Goldfields Cyclassic is Australia’s richest handicap cycling race. Both the Veris Racing men’s and women’s teams ventured to the event hosted by the goldfields cycling club. This event has an extensive history, and allows for cyclist’s of almost any fitness level to participate in the event. A unique offering allows riders of any ability level to participate across two days of racing and enjoy some of Australia’s beautiful interior countryside, with like-minded cyclists.

Erin Nolan was the women’s winner of the event across the 2 days of racing, we here a little more from her here:

Race report from the weekend…

Conditions were excellent with warm, fine days and a slight head/cross wind. Our girls set off in C Grade which had a 20min. head start on the scratch boys for the 132km race from Kalgoorlie to Menzies. The group of 20 started strong working well together in the roll through. A few riders had dropped off the back by the 30km mark and as the race went on, less riders were inclined or able to work the roll through at the pace that was being set by the small group of 6 at the front, finally whittling down to 2 time triallers driving the front of a long line before the scratch riders came roaring passed at around the 85km mark. Those who could jumped onto the train and held on for as long as they could. Erin stayed with the lead group through to the finish line crossing as the first female while Sabine dropped off the back at 100km. She finished the final 30km working in a mixed group of B & C grade riders finishing 9th. Steff was impacted by the heat and a lack of water for the long ride but she worked incredibly hard on her own to finish the race despite being very dehydrated in tough conditions.

Day 2 saw C grade reduced to 15 starters for the 103km race from Menzies to Leonora with a 17 minute head start on scratch. With a slight tail wind compared to the previous day the group worked the roll through well with Sabine taking more than her fair share of turns on the front allowing team mates Erin and Steff to re-hydrate and refuel. The group stayed together until the scratch riders came past at blistering speeds by the half way mark. Again, those who had the legs to catch the back of the A grade group did. Erin got onto the group and held on for about 20km before dropping off to form a small group of 4. Sabine only just missed the jump but formed another small group of 4 and worked solidly together before being caught by the B grade pack that Steff was working with. By 10km to go all the small groups had come back together and enjoyed a helpful tow into town for the final 5km by one of the Veris men’s team mates which ended in a bunch sprint for the line. Pleasing to end up with all team mates in the top 10 overall women’s results with Erin 1st, Sabine 7th and Steff 10th.

With between 6.5 and 7.5 warm hours in the saddle for the weekend, it’s no surprise that 12 riders didn’t finish. The experience will be well remembered for us all and looking forward to next year already. The event was so well organised and everyone had a fantastic time in the Goldfields. 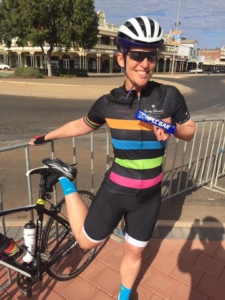 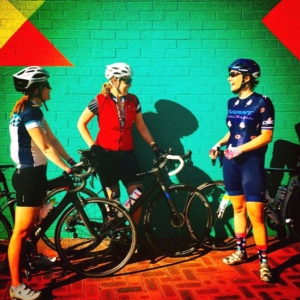 Henrie, pictured right, ventured to Kalgoorlie for the event as someone new to cycle racing 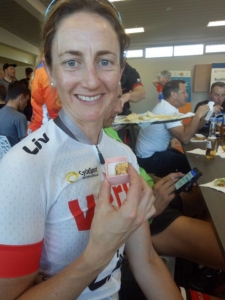 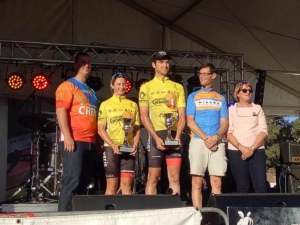