Across the two days of racing VR athletes accumulated 7 podium medals over 4 different categories in U15, U17 and U19 Male & U19 female. The events would not be possible without the Midland Cycling club, a huge proponent of junior racing in WA, and Peel Districts Cycling club, another big supporter of racing in WA. A very big well done to all competitors racing.

We hear from two of our juniors attending the events,

“What a day to have the Time Trial, barely a wisp of wind and the rain held off. I feel as though one of the key parts to the time trial is getting the warmup right. To short and you don’t get as much benefit, but if its to long then your just wasting energy. I prefer to warmup a bit isolated as I am able to focus better on what i need to do. Today was also gonna be a bit different as I was riding with a disk wheel for the first time on the road. I also tried a different approach to the time trial where I started a lot more controlled and then increased my pace up on the second lap. I feel this helped me significantly as I kept getting faster each lap compared to a lot of people were going out to hard and lost time in the later part of the race. A key tip I use when time trialing is focusing on my breathing. This really helps me get oxygen to my muscles and use and use aerobic respiration to produce energy. Over all I had a positive race, setting a new personal best and finishing second overall.

The Road Race turned out to be a very interesting race. The course was very different to what it had been in previous years, this year it was dead flat with a little pinch towards the end but it didn’t effect the race that much. We had 3 Veris riders in the race including Chester, Rhys and myself. We planned to ride with each other rather then for one of us or against. I think this was a smart play because it allowed us to play a few different options and giving everyone a chance to make a play. There were many attacks through out the race but nothing got out of sight until towards the end of the race. I really began to struggle in the later part of the race and it was really hard because Chester had a flat and was unable to return to help chase when a rider went out of sight up the road. Rhys and I did our best to chase but it wasn’t enough. I manged to follow a good wheel leading into the sprint to finish 4th over all. It was a good day of racing and I think as juniors moving into a high rank in cycling it was a great experience to come away with.”

” I competed at the State Championships and had a pretty successful weekend, in the TT I knew where I sat against the other competitors but was feeling optimistic and striving for a podium place. I set off and had a pretty good start and knew the course very well. I was holding fast speeds along the back straight and tried my best to match that on the home straight, I finished nearly about to collapse and ended up getting the exact same splits for each lap and was happy with my consistency and pacing. I ended up setting a PB average speed for that course and taking out the third position and was happy with how I went. Good job to Matt Connan who took out the win and Toby Dew for taking out fourth.

I knew TT’s were my strong point but it’s always been a luck of the draw in the Road race especially in our age group as we have many capable riders. But the team managed to work together and get all three of us in the break which was the goal. After countless attacks, it came down to the sprint and my team mate Toby Dew made an attack which didn’t succeed but did initiate the sprint. Matt Connan my other team mate lead it out but Joshua Commons had too fast a sprint. He came past me early on but I held on to John Carter’s wheel and narrowly missed out on second by a tire width. I was still happy as I managed to podium in both the road race and TT as well as the criterium earlier on in the year. I think the U15 group improved a lot in that race in terms of teamwork and race tactics and can start racing a lot smarter in the future to benefit each rider. Thanks Brad for setting up the tents and making a good environment for everyone to warm up in and chat about the racing. “ 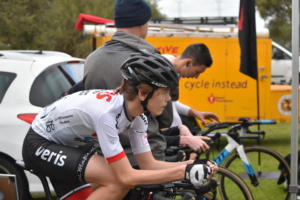 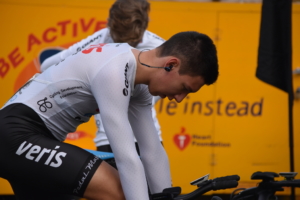 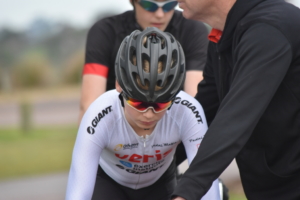 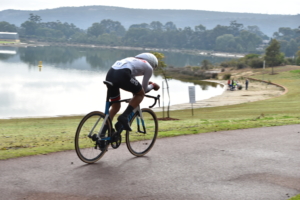 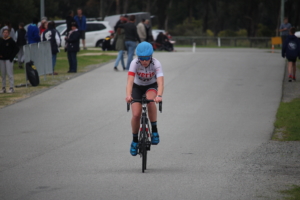 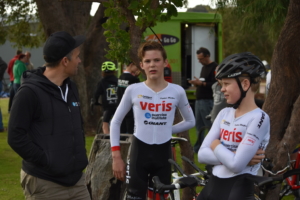 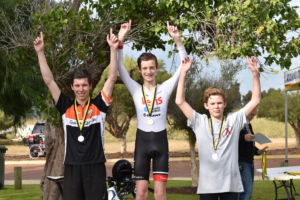 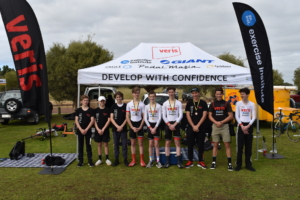 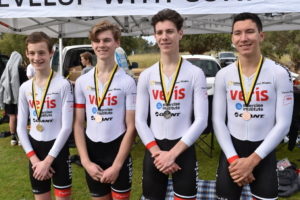 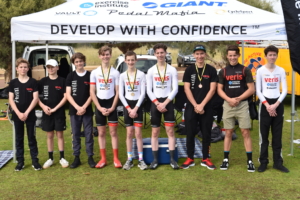 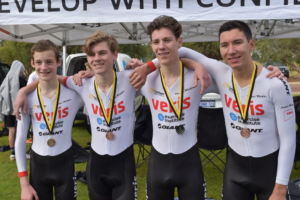 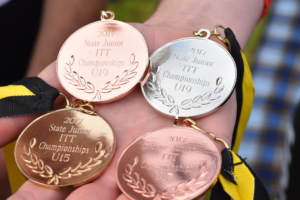 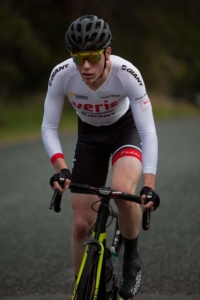 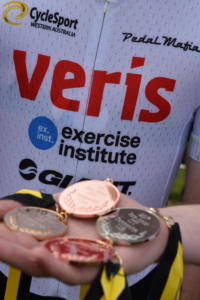